Days 1 and 2: Home to Killarney, Ireland 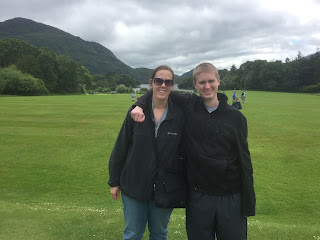 We met at noon at the Jr/Sr. High School and took two vehicles to the Detroit airport.

The members of the club going to Explorica's Best of the British Isles tour:

We got to Chicago (ORD) on time and made it to our gate in time for boarding. The plane was pretty full and we took off on time.

We arrived in Shannon, Ireland 50  minutes early!! It was a breeze going through customs and all of our luggage made it also. Our tour director and bus driver were not even at the airport!!

We met the other groups while we waited at the airport. Hymie had a group of adults from the Ann Arbor area. Lisa had seven students from Little Rock, Arkansas as well as two other adults. 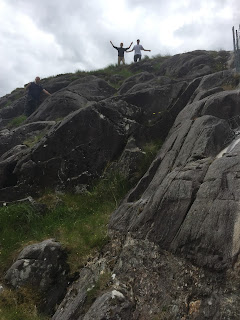 The breakfast was pretty good. A lot of choices for our continental breakfast. I certainly ate my fill.

We left a little early for the Ring of Kerry (I have a great group). We made a few stops as we traversed the ring. The first was at a peat bog village. There was a tour on how they used the peat bog to help make fuel fires. There was also the chance to buy touristic items.

We continued on and did other stops at various places for photo ops. The Ring of Kerry  has a lot of mountains and ocean scenes, a lot at the same time. The boys and Steve liked running up the hills to get a better view.

We stopped at Killorglin for a view. We learned Charles De Gaulle had retired to this part of the region after he was president of France.

We stopped at Waterville for lunch. This place was famous for hosting Charlie Chaplin when …
Post a Comment
Read more 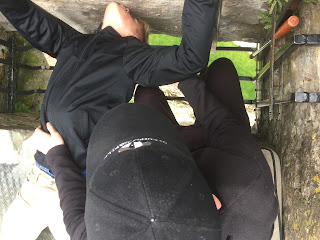 The group made it down for another wonderful continental breakfast. We packed the bus and took off for Blarney Castle in County Cork.

We arrived there around 11:00 a.m. and got in line after purchasing tickets. It was about 45 minutes in line, but we passed the time exploring the nooks and spaces in the castle. They did a good job putting witty signs around the grounds and palace explaining what we were seeing.

Most of us got up to kiss the Blarney stone but all of us enjoyed the view. You had to get on your back and kiss a stone below floor level. Good thing there were rails to hang onto. The Blarney stone was originally from Scotland and became part of the castle. It was a gift in celebrating a victory over the English that they shared with the Scots.


After we kissed the stone and descended the castle, the group looked around at the rest of the grounds and gardens. I enjoyed the Poison Garden next to the castle. It was interesting to see the plants and the signs tha…
Post a Comment
Read more 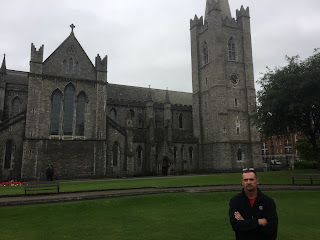 We left the hotel at 8:00 a.m. and picked up our tour guide in Dublin. Michael had a hurling stick and talked about the game. He had a pretty good repertoire with our bus driver Colm. Some of our group practiced hitting the ball with the flattened ash bat/stick and we continued.

The weather was pretty chilly. It didn't rain, but I think it was the coldest day we've had so far.

Michael spent the morning with us pointing out things in Dublin like where sports are played, government buildings, and churches.

The two Anglican churches, Christchurch and St. Ann's church charge for people to see it. I think I heard that it takes 4000 Euros for Christchurch to run per day.

Towards the end of his time, Michael took us to Trinity College to see the Book of Kells. We said our good byes and then saw the exhibit.

The Book of Kells is basically manuscripts of the Gospels from the new testament, created in the 9th century. It did very well to survive in such good co…
Post a Comment
Read more 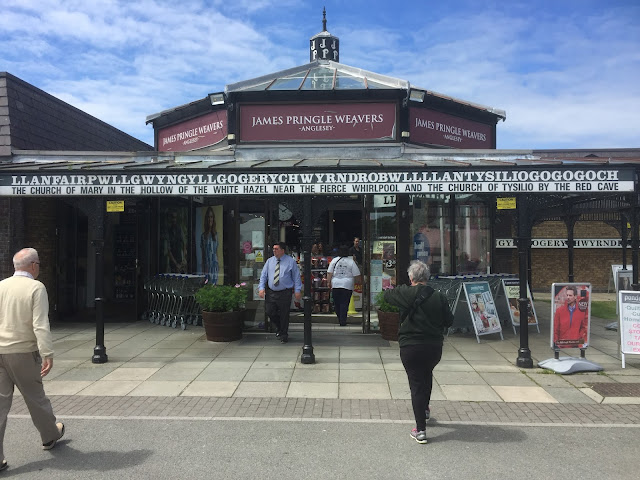 We got up extra early so that we could arrive at the ferry an hour or so before loading. There was a minor snafu when our boxed breakfast was accidentally eaten by another group also leaving early.

We got on the Stena car ferry and left on time for approximately three hours on our trip to Holyhead, Wales. the group grabbed a spot and we alternated between sleeping and exploring around the ferry.

We arrived, got out, and grabbed our stuff from the carousel. No problems with customs and so we got on our bus. Our bus driver, Alan, is from Scotland and was with us until we fly to London.

Our first stop was not far from the ferry. It's the village that has the longest name in the world. The picture demonstrates the name. We exchanged money as well as bought gifts and looked around. 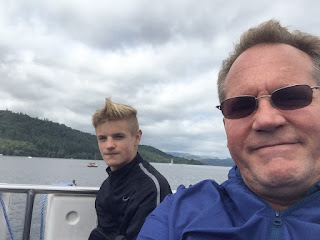 We are finally getting over the jet lag, I think. Everyone got up in time and had a good breakfast. The bus got packed.

We left at 9:00 a.m. and headed north. After a few hours, we stopped at Windermere, a large lake in the Lake district of England. We had a few hours to ear and take tours around the lake.

The tour was relaxing, especially when the sun came out. The tour just pointed out different small islands and homes as well as where boat races start. It certainly reflected how the English like to spend their time if they are on vacation in the Lake district. It seems like the cottages and places they could stay were very quaint.

We got on the bus again and went around the Lake to Rydal Mount, home of the poet William Wordsworth. We got to look around at his home and see the gardens and grounds, which were very beautiful.

I also learned what a romantic poet was. I thought that this type of poet dealt with true love and the like, but they actually concentrated on …
Post a Comment
Read more 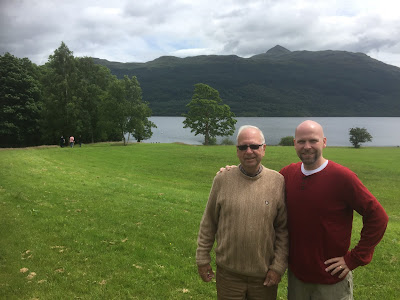 We got on the bus after going over to the welcome center to get breakfast. It was the beginning of the long trip north.

Our first stop was at a small village called Luss. We got out and looked around. It was on one of the lochs. After about a half hour, we continued on.

Around 1:30 to 2:00, we stopped to eat at the Green Welly (a welly is a type of boot), which is a bus stop for refueling.  I had scotch broth, which was pretty good soup with beans and pasta.

We continued north, stopping at Loch Lomond. All the scenery we had were lochs and/or mountains. the weather cooperated spectacularly, staying around 60 degrees and not raining.

We also stopped at Fort Williams and looked at some of the ruins of the old fort. It was built by the British to help keep the Scottish clans in line.

We stopped at Glencoe and heard the story about how the English King gave all the Scottish lords a deadline to swear loyalty to England. One clan, the MacDonalds, didn't make the deadlin…
Post a Comment
Read more
More posts